I didn't think I'd see this for another decade, let alone in my lifetime. When my symptoms related to gadolinium exposure from my single-dose MRI contrast agent get particularly bad, I go deep down the Google rabbit-hole in search of hope, which I typically try to avoid for this particular case because I'm afraid of what I might read. If you haven't been following the last two posts, I suffer from a condition known as Gadolinium Deposition Disease, which developed immediately after a one-time administration of a gadolinium-based contrast agent for an MRI scan.

The disease was first classified by radiology textbook author and then professor of radiology at University of North Carolina Chapel Hill, Dr. Richard Semelka. The man is brave, because it is difficult even for me to share the state of my condition due to the simple but depressingly lonely fact that no one believes you. No one believes you're unique in suffering from a disease elsewhere unfounded, from something as common as a contrast agent. If it's this hard for me to talk about it, imagine how hard it must be for an academic to go against all current literature and corporate incentives and choose to believe his patients. Not an easy feat for doctors.

The disease and its classifications have stayed relatively on the fringe for the last several years, but this appears to be changing.

Published November 16 2021, The American College of Radiology published an official report on SAGE: Symptoms Associated with Gadolinium Exposure. They're strictly maneuvering to avoid the "disease" classification, a direct nod to Dr. Semelka, and instead publishing a suggested list of symptom reports that are seemingly on the rise.

You can find me in the right-most category below: 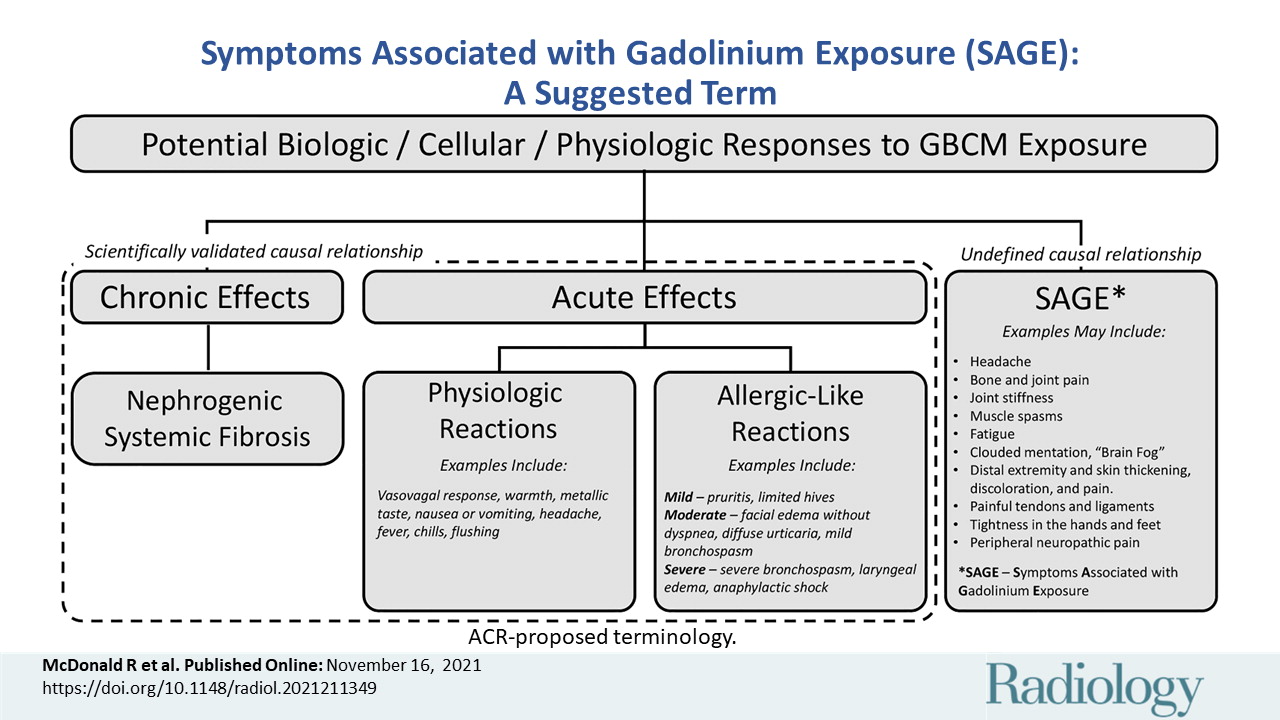 Official whitelist symptoms include (which for the record are not ephemeral and I have been experiencing for 16 months now):

The bolded entries above are the ones that most afflict me.

Here's the thing. If it was just pain, I'd be somewhat ok with it. I would feel like my lifespan wouldn't be affected by say joint or muscle pain. What troubles me the most is the numbing of my hands and feet (which I suppose is encapsulated by "peripheral neuropathic pain.")

Do you know that sensation you feel when you awake after having slept on your hand and it's alarmingly numb and abuzz? I feel this wonderful sensation randomly throughout the day in my hands and feet. I'll be typing something and suddenly my hand will start to vibrate with numbness. This is the worst symptom of all, because it scares me as to what the underlying mechanics could signify.

After publishing my last few posts, I have heard from several people who've told me they are due for a scan and hadn't the faintest idea what contrast was—they likely would have just acquiesced to the doctor's orders. They are now armed with the information I wish I had to decide if contrast is worth the risk.

Please do yourself a favor before undergoing any medical procedure or drug: do the research. It's scary what you may read sometimes. But believe me that the alternative is ten million times worse.

I leave you with this description of what GDD is like, via Dr. Semelka's blog:

GDD falls more in line with classic medical knowledge: it is an allergy—and more specifically a T-cell disregulation type of allergy. [It] is essentially like a peanut allergy, with the difference that the micropeanuts of Gd have durable retention in your body. In the case of GDD, it is a million micropeanuts hammered into your skeleton and skin.

You'll only receive email when they publish something new.

I wrote this post on April 7, 2021, but never published it. I guess I just didn't want the disease to define me. Surprisingly, it also takes a bit of courage to publish something that goes against the official whitelist of negative medical interactions. Most people believe a hospital would never give you a drug or chemical that is known to be toxic. But of course, every drug has its interactions. I publish this now because without public bug reports, nothing gets fixed. I wonder if on that da...
Read post

The universe is described as having went from a state of nothing to being everything in a trillionth of a second. You know what else has that property? Software programs. Software programs go from a state of absolute nothingness to a state of infinite proliferation every time they are turned on. And what is software—like us—but an animation of electricity into different patterns and formations? In thinking about the nature of our existence in the past, I had imagined that our simulation was co...
Read post